Some Pics of my Trip 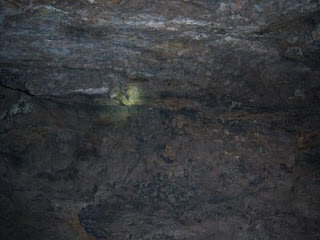 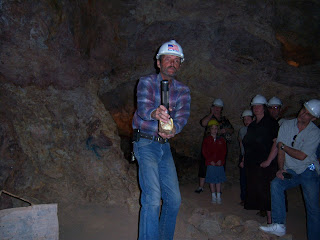 Okay, try to figure this out. The top pic is well underground at the mining operation in Tombstone, AZ. The man in the pic is the tour guide, we are at least 60 feet down, I think they said it's more like 100. It's very dark in there, they have lights set up here and there, but this guy was doing this in almost total darkness. There are 2 pics of holes. They aren 't really holes, they're shafts where they were removing the silver. The explanation was that the entire crew of people were give 3 candles to work under there. That's ONLY 3 candles for everyone. He further explained that they were basically working in the dark, but could tell the "feel" of the silver. And yes, we got to feel the streaks of silver in the walls and it did have a unique feel to it - though not so unique that I would be able to identify it in the dark.
The odd looking machine? An engine that produces steam. It would "drive" the piece of machinery that drills a hole into the rock. They would then put a stick of dynamite into the hole and blow that portion of wall apart.
Dad was having a hard time getting back up out of there. It was a lot of steps up and even people in good shape were panting. Ihad to stand behind him all the way up to make sure he didn't end up falling.
I was pretty impressed that he still has such desire to go do such things considering that it is obviously not that easy for him to do.
We all had to wear hard hats under there - the ceiling in man places was so low I had to duck WAY down to get underneath. 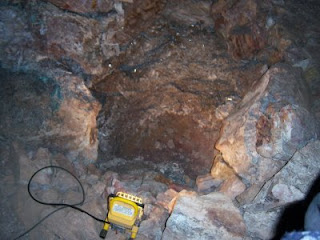 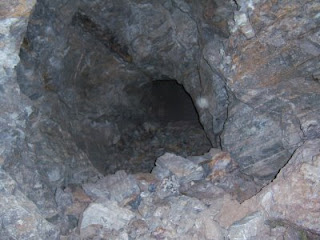 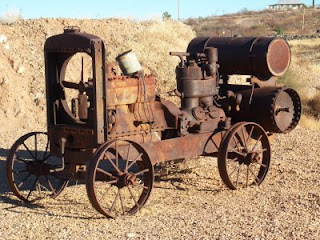 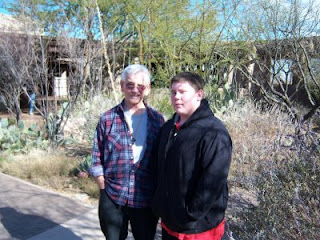 This is at the entrance to the building that gets you into the Kartchner Caverns. Can you guess which one is me? Lol. I don't remember being that much taller than my dad. 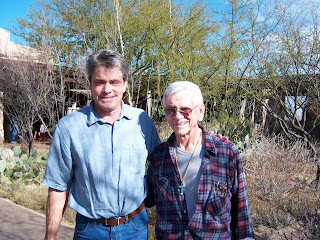 Email ThisBlogThis!Share to TwitterShare to FacebookShare to Pinterest
I've been setting here for hours attempting to navigate all the junk to be found on Blogspot in terms of trying to get the thing set up the way I want it to be set up.
I hate the pre-designed themes for the blogs here, I have gone beyond those borders and attempting to upload a couple of different blog templates that I thought looked cool - none of them would work.

Undoubtedly my own ignorance in that department, oh well.

And no offense, but having to do all that stuff on several blogs in order to be able to post a comment, including having to type in the "word" shown is a bit of a hassle.

The games yesterday, what a HOOT!!!
I DREAMED that the Chargers would win and potentially be up against Pittsburgh, I had no idea that it would actually happen. What a great game that was, too! Overtime, the Chargers win the toin coss and walaah, they actually manage to score and win the game. Manning never even had a chance to get on the field after overtime started.

The Cardinals also pulled off a HUGE upset, at least as far as I'm concerned, against the Falcons. I found myself actually rooting for the Cardinals. I know, kinda lame, I'm "supposed" to be a fan since it's my home team, but - I have always been a Steelers fan through thick and thin and will never let the Steelers take a number 2 spot on my very short list of favorite teams.

So there's a couple of more Wildcard games on today, I'll be watching those as well.

The extended periods of days off are over as of the end of today. For whatever reason, having a hard time getting my brain back into full-work mode. I don't have any choice in the matter, I'll be at work at 5:45 am tomorrow morning, and I will be there until at least 2:30 pm and that will be that. Afterwards - on one day this week anyway - I will probably be heading to Fry's to fill out an application in person and attempt to land a part-time job there.

My new tenant thinks I should just do the taxi thing for 48 hours during the weekend. Weekend Warriors they call them, people who just do it on weekends. I think I'd rather work at Fry's to be honest. At least, if I could get a job cashiering. Well, heck, if I had my druthers, druther be finding a job on the side driving a truck. That hasn't exactly happened, yet. As the economy dives further and further, jobs of any kind are becoming more and more scarce. Perhaps you might call it extinction. Not a heckuva lot out there and I did not bother to buy the Sunday paper today or last week cause' it has practically nothing in it. 3 pages - where it used to be friggin' 20 plus pages of employers placing ads for help.

Oh, I have pictures! Have yet to upload them to my computer, though. Try to do that later, I'm trying to get some laundry and other things done right now. Gotta make a trip to Fry's later on - for food, not a job - and I still have holes to dig outside, plus I was going to go get those poles today.

Again, this period of having all the time off is spoiling me. I could take another week off of work and not miss work -at all. Yes, I even have the hours saved up to do so. Lessee: 61 hours of sick leave; 40 plus hours of vacation; 24 hours of personal time and 16 hours of floating holidays plus 6 paid days off for holidays and I get my birthday off. That's almost 200 hours of paid time off for this year. Plus I accrue even MORE vacation time. 6.6 hours per month, to be exact.

I'm still wondering what's going to happen at the main branch at my company. Someone has to move to Albequerque (no, I won't even think about it). An inside salesman, to be exact. Which means, if/when that person decides to do so, someone will have to be promoted to take that person's place. I can think of some others that MIGHT qualify for the position, but the pickings are starting to thin out. People that are qualified are already filling other positions that have to have someone filling it. Wait and see thing - I have put my name in the hat more times than I can remember in informing management of my desire to get out of trucking.

Whether it actually materializes, who knows.

Well enough of that - the previous post that is. Excepting that I found out the hard way this morning that there is ammo hoarding going on, ...