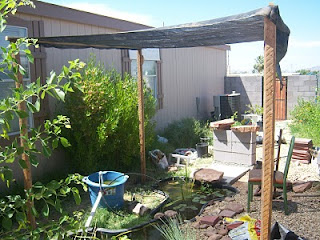 Latest shots.  First rock is put into place - but not cemented.  This is the trial (pain in the rear) run. 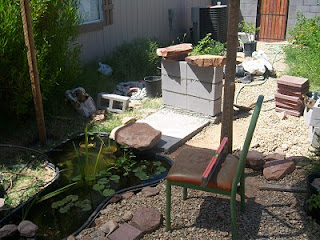 Closer view of the same thing. 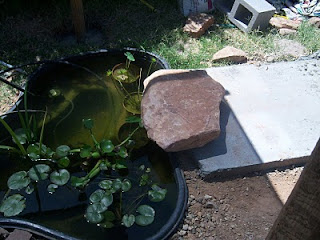 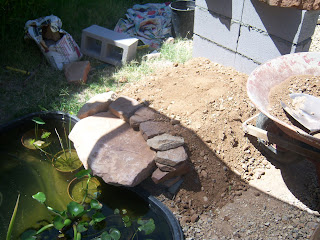 Filled in with dirt and put smaller rocks on top of the big one
(this will all have to be cemented into place once
I figure out how I want it). 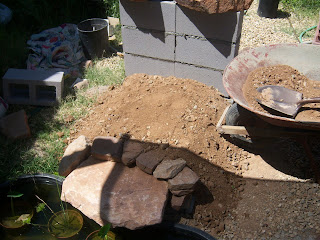 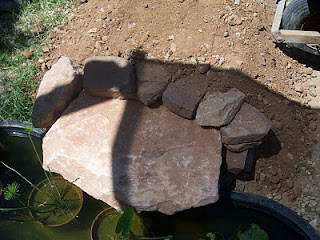 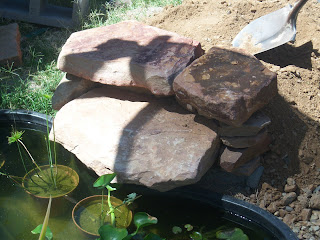 Missed a shot somewhere along the way here.
I had the rock on the top left centered on top of the bottom
rock first.  Then, I added that second rock and moved the
top rock to the side.  I'm thinking of taking the left rock
and flipped it over to have a crisper falls. 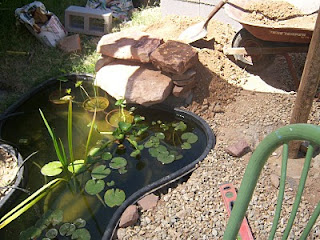 In reality, I was going to go with a much larger falls until I realized what I was doing. The falls would have been disproportionate to the size of the pond it is falling into. Even this might seem a bit of over kill - oh well, I'm not turning back now. I could maximize the top of the falls when I get to that point and have a small pool of water up there. Who knows.

I'm going to be fiddling with this for a while until I decide how I want it. No sense in getting in a big hurry - once you start cementing stuff together, that's it. Total pain? Yes. Worth the double/triple/quadrupled effort? Most definitely. I really should be moving along with this thing and just getting it done, but I find myself constrained by my own sense of perfectionism: it HAS to be right or I will just look at it every time and kick myself wondering why I just didn't go to the extra effort.

Temp tenant? Staying another week. Benb sighs a deep sigh of relief. Electric usage is going up to higher levels by the week. It becomes a money dump in the summer - keep the power meter fueled with money fire to keep the AC running. Assuming ex-Marine is staying, he has promised that when he leaves, he will give me ample forewarning. He already did once - but then changed his mind after his buddy lost his job.

The newest tenant? Calls me today. Her boyfriend is moving out of wherever he's at next week or something, she's hoping he can stay with her. I've done this before without any problem. Will there be a problem with these 2? No idea. Informed her it would be extra rent - I am not footing the bill for extra utility usage. I have met the boyfriend and have talked with him at length. We get along, is all I am pointing out with that. He landed a job at the WigWam - a classy resort hotel - not too long ago. I'm assuming they will save money and then - move into their own apartment eventually. She wants a place to call home so she can have her kids back.

Can't blame her, however, there is this little thing called recovery that she still needs to be going through for a while, my opinion. Only 3 months out of being a meth user, she needs to let the kids stay where they're at with grandpa and grandma for at least a year - my opinion again - until she proves to herself and everyone else that knows her that she is off the drugs and will be staying that way.

Relapse is easy. Too easy. Life gets hard, take the drug, life is easy again. Sort of. Payment is due. I say that with however we live. We pay a price. For good or bad. Stay tuned for more of BenB's life and ever-changing household situation.

3:00 pm. Lazy Sunday afternoon. Yes, I am through with cementing in blocks, moving dirt and large rocks around for the day. I am feeling a case of "do-nothingness" overcoming me. Nothing left to do around here that is blow-up important. House is relatively clean - still want to mop the kitchen floor today. Suns game in a few hours. Have some Teriyaki chicken to cook up. Yup, except going out there and turning on the valve to water the plants, I am done with that for today.

My dogs are looking gaunt. I mean skinny. Too skinny. I give them as much food as they want to eat. I don't want fat dogs, that doesn't seem likely with any of these giants. I really WANT them to eat more, they simply won't. The goldfish outside, however, are happy to eat as much Koi food as I want to give them. Well, they are looking very large, I am feeding them, yes, but they look like they need to go on a diet. Ex-owner admitted he probably feeds his fish too much.

Well it's almost 3 pm and I haven't heard from the manager about a run for tomorrow, so I'm going to assume that it isn't go...