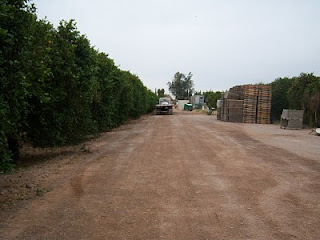 This is the orange grove that I have talked about before. You can click on any of the pics for a MUCH larger view. That's "my" truck and I backed that sucker a long, long ways in there. 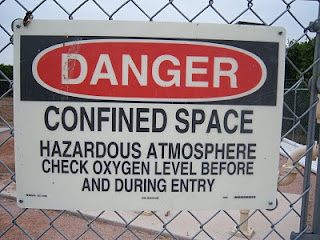 Hol'on a sec while I get my hand oxygen gauge I happen to have in my back pocket....seriously, this is the "thing" they were adding on to in the middle of the orange grove. Why they have that sign there - well no-one there could answer my question, but I didn't die of asphyxia while there. 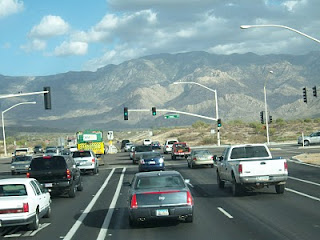 This is near Tucson. This was the day that I-10 was shut down by Casa Grande and the ONLY way back was to go around. Actually, that pic is showing near Oracle and leaving Tucson. There had been a major crash on I-10, 3 people killed a semi actually blew up all kinds of carnage and waste. 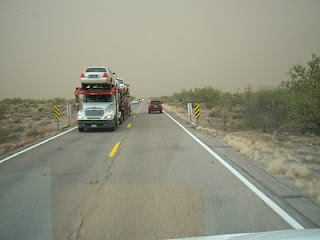 This is the highway - SR77 I believe it was - it was very windy that day. The picture doesn't do the scenery justice - it was a total brownout and it was quite eerie out there in the middle of the desert with the sky all brown and everything around brown as well. This road usually doesn't have anything near the traffic that was on it that day, but it was one of the few roads to take to get to Tucson from Phoenix or vice-versa.

Yesterday, I didn't do quite as well as the days before it, but I'll still take it. A ham sandwich - 2 slices of bread, 1 slice of ham; a can of Chunky Soup - a little calorie laden and probably fat too, but I was very hungry at that point - and I ate a few slices of raw potatoes while making a pot of stuff for the kids to eat - I ate none of that stuff though it was very, very tempting.

Actually, I was working all day long and went into overtime because there was a lot of freight to put away - I was not feeling well for lack of eating. Only after I got home and wolfed down that sandwich and yes, then ate that can of soup did I feel better.

Anyway, I don't remember how to add pics to this site, so I'm going to add one, see if it works, if it does, come back and post more with commentary....here goes:

...well it put the pics at the top of the post. I guess I could have copied and pasted them down here, but what the heck. Wanted to get a few pics up since I haven't posted any in a long time. Going to take some pics of the work we did last weekend on spreading around all the rocks maybe later today or tomorrow.

Computer totally crashed yesterday. Virus. I don't even fool with trying to fix viruses anymore, I have wasted far too much time in the past in trying to deal with them. I just immediately reformat the harddrive and reinstall windows at this point. I can have it down in less than an hour and have enough software installed to be back to normal. I've gotten pretty good at it - I paid someone once to do it for me a long, long time ago, but realized that this was probably going to happen again and again - you get the picture, no way could I afford to have someone come out and fix this thing everytime a kid downloads something stupid on my computer (which always gets them banned for at least a week, sometimes as much as a month) or perhaps I have gone to a website that starts putting stuff onto your harddrive before you even know what's happening.

I have to take the blame for yesterday's junk. Some "thing" popped up on my computer screen and told me I have a virus. Yes, I thought, YOUR virus. Sure enough, this is the same virus that hit it about a month ago. It virtually takes over you computer - you can't access your control panel, well you really can't do anything after a while except to shut the computer down.

Well, anyway, today will probably be something of a battle in the diet world. I'm home, it's the weekend, I usually like to make a pot of something or other and eat it. I'm mildly hungry right now, mornings aren't usually an issue, it's the afternoons, especially on a Saturday or Sunday. Since I figure I will probably end up eating something, I will have to figure what I can make that isn't full of fat and laden with too much calories. I'm leaning towards a chef's salad. I've done the diet thing before - if I start feeling I'm depriving myself, then I start getting hungry even if I'm not, it's all in the mind, just have to figure out how to fight the battle and win.

Prolly a meet-in-the-middle, have a couple of calories, work outside and burn them off type of deal. I have plenty of work to do outside in pulling more grass and getting the rock spread around the plants.

Anyway, hope you are all doing well, I'm outta here.
ben
at January 16, 2010 No comments: Links to this post

I have an absolutely horrible headache. But I'll get to that in  a moment. After discussing today with "people in the know", ...