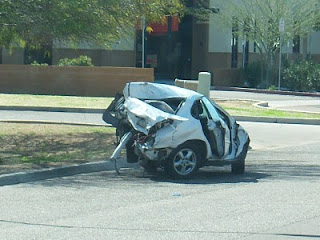 There is a towing company with a huge yard across the street from our work. I see totally trashed vehicles on top of tow trucks coming in there every day, but - this one takes the cake. If anyone was in that car when it was ran into, I would assume that person or those people have met their Maker at this point. A Fedex driver came into our store today all worked up about that car. When I saw it, it was something out of the Twilight Zone. I came back by later to take several pics of it - I was in the semi when I took that pic, but it was gone. They don't leave that stuff sitting long, I really have no idea WHY they bring all those vehicles over there. The reason I say that is because they bring many of those vehicles in there, leave them there and then later on move them - somewhere else. When I say somewhere else, I mean a tow truck comes back, loads it and takes off with it????

Slooooooooow week at work, until today. Suddenly there are 6 deliveries and a return in the system. Just like that - poof and they're there. Well, it would be nice if some of this stuff would have come on days when there was nothing to do, such as yesterday. I spent most of the day yesterday covering up plastic pipe.

Arizona sun burns the stuff. From light brown to black, that pipe gets pretty ugly. It STILL burns even when covered up, but at a much slower pace. At this time of year, not so bad, but any discoloration now will be intensified great in a couple of months from now.

Tenant issues continue to plague me. Yesterday, Michael said one of them was taking his food, food his mother had bought for him. I have seen this individual - when going through video surveillance - taking my food before. I have had this problem before and I had to directly confront the person to get it to stop. Well, this guy has new hours at his new job, the best I could do was leave a notice under his door. When I did see him on surveillance doing his thing, he would go through my cupboards and both refrigerators, digging through all of it as if he owned the place and the stuff what is in it.

Hunger tends to drive people to do whatever they have to, including stealing, to stave it off. Yes, I consider taking another individual's food to be stealing. I also find it quite annoying, especially when I am getting lower on funds, food is a huge expense. It does answer questions about how the food I buy can possibly go as fast as it does.

The other tenant I also have not seen. He's THERE, coming home after I go to bed. I also left him a notice, but this notice was pretty blunt: I need money, now, thanks. It's amazing how people will go out of there way to avoid you when there are situations like this going on.

The 3rd room is still empty. Another no-show yesterday. The dude that left for California is back in town, I found that out yesterday from his employer. I left him an email saying he could have his old room back if he could come up with some money. He wrote back later saying he was broke and that he wasn't staying, but would be by to pick up his stuff.

I hope he intends on showing up with $115 in hand to get it, because that stuff ain't going anywhere until he does. That's back-due rent he owes, and though it's illegal to keep a person's personal belongings ransom for rent, it is NOT after X amount of days have passed after that person leaves. Well, that time frame is LONG over with. I could charge him a storage fee on top of the back due rent, but I would be just as happy to get the $115, let him have his stuff and get on with other things.

So, anyway, confrontation time has begun, we'll see where it goes. I half expected to find a letter from either or both of them out there this morning, nothing. I am hopeful my letter to the food-stealer was enough to not have to deal with that problem again, I have no clue how the other guy is going to pay anything towards his rent since he has apparently spent all of it on - whatever he's spent it on. I dunno, and at this point, I don't care. He can go jump in a lake for all I care after he got a tax refund check and offered me nothing towards the rent out of it. I would rather have ALL 3 rooms empty than have non-paying tenants in them. As you well know, anyone living in a home is costing the homeowner money regardless. If they are taking hot showers, using the toilet, doing laundry, cooking, watching TV, using the internet - add all of that up and yes, they are consuming.

Again, it starts to get very annoying.

Yeah, that's it for now. My focus is totally on correcting these situations - however it has to happen. Amazingly, my dad has offered yet again to help if I lose my job to layoff or if things get "dicey" around the house with non-paying tenants. I did NOT ask for help, in any way shape or form, he is, apparently, even more interested in helping me out since the fact that I am helping 2 homeless people with somewhere to stay came to light. HE is totally into helping people in need, especially the homeless. He has been going around giving out assistance to such for many decades now. I didn't realize the effect it would have on him for him to find out I am doing the same type of thing - I didn't let him know that I have been helping homeless or near-homeless for at least 20 years now. I just never went as far as to have 2 of them, a couple, living on my property in a travel trailer.

BTW, they hand me over that $25 faithfully every Wednesday. Hey, it pays for their use of utilities which is all I was looking for. The man goes around and does odd jobs for whosoever will give him whatever he can get out of it.

As for this entry, it's history cause' work day approacheth and finally, there is PLENTY of work to do today.