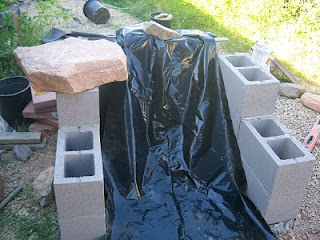 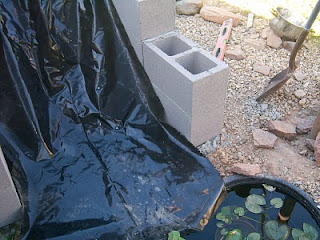 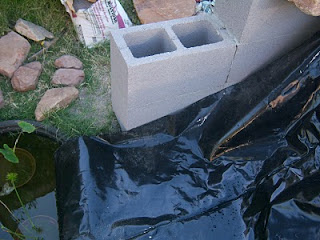 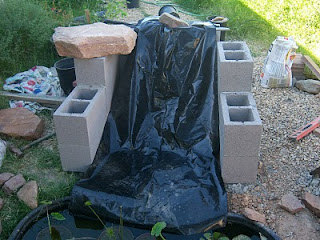 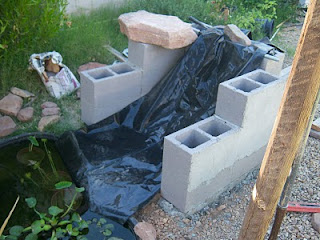 Or is it part 5? Well whatever it is, it is at the point - tomorrow anyway - where I can actually start building the falls and not have to continue working on the prestructure.

This is the revised version of my initial plan.  To make a small pool at the top necessitates the need for the block.  I could have used rock - but for that much rock for sides and back?  No.  I am not going to wait forever to get the falls flowing.  Eventually, I will stack rock on all sides of this setup.  That is not a happening event right now.  I am hopeful for trips up north in the semi, eventually, where I can take my break time and gather up rock and fill the side box with them.

I may remove the 2cd level of block on the tier closest to the front.  Unsure.  That second level may not be necessary.  If it isn't, it's definitely going to go away.

Notice on the last pic - I used the remaining mortar mix to "stucco" the sides of the block - a better look than plan ole' block for now.  What's missing?  I didn't have a sponge handy - you can take a wet sponge and smooth over the still-wet mortar to give it a very good outcome in looks.  No worries, that was my first attempt - ever - at that.  The right application tool would be helpful.  I have been wanting to try that for a while now - there is still a good portion of fencing on the west side that needs finished.  I'm sure I can do it now, just a matter of time and - yes - money.

I will be working on it every day, one stage at a time, until it's done.

It looks like junk now, I envision the finished product.  May be a long way off, no biggies.  Plastic is the fail-safe - if there is a leak, the water will end back up in the pond regardless.  I am going to triple it for - failsafe on the failsafe.

I have been watching, totally changing the subject, the live video stream of  British Petroleum's now gushing oil well.  I assume BP is still an acronym for British Petroleum.  Yesterday, I was watching the end of a broken pipe spewing out raw crude.  Today, I was quite surprised to see a cake of - I'm assuming the "heavy mud" that had totally circumferenced the pipe, apparently, and the oil spewing through cracks in the cake.  BP may not be saying it, but it appears to me that the flow has been slowed.  Not stopped, not even close - but slowed.  I may be wrong, but the caking of the heavy mud is all around the pipe and it's outlet.

More interesting, I left that and came back a few hours later.  They had switched the cameras to a robot that was - doing whatever.  Appeared to be a gauge that was installed.  It was showing 2100 range.  2100 what? Not barrels, maybe gallons per minute? Per hour?  I am totally fascinated by such things, however, I am also extremely alarmed at the environmental impact as probably millions of others like me are as well.  I don't wonder if BP files chapter 11 or other bankruptcy in the end.  Or, is that company THAT rich?

Regardless, I wished for a narrative to explain what I was seeing.  It then moved to a view of 2, bolted flanges with what appeared to be bearing housings in the middle and a shaft in the middle of that.  Could be totally wrong, but those were definitely flanges I was looking at, bolted to - whatever - couldn't tell.  I dream of such a job - operating robots 5,000 feet below you.  I imagine the operators having a lot of pressure on them to not screw up - there is far too much riding on what happens next.  Which, apparently, is pumping more heavy mud and then the concrete.  Fascinating.

Suns V Lakers game starts in 10 minutes.  I'm - excited and nervous.  Lakers have home court advantage and definitely, that IS an advantage.

So, I'm outta here.  Gonna watch a few minutes of the pre-game narrative.

Thursday already!
3-day weekend in queue.
Found what I was looking for for my homemade bio filter on ebay. It's filter media - coarse on one side and fine on the other for filter the water as it passes through my setup - which I am going to change when I get this filter media. Undoubtedly, I also built that thing far too large. I mean, it works and that's not a problem, I just should have bought a much smaller container to build that setup. Oh, the filter media? $2. lol - shipping was more than the product itself.

I didn't know until yesterday that BP has live footage of the oil gushing out of the pipe at the bottom of the ocean. Amazing. Amazing the damage all that oil is causing and unknown problems for years to come.

Don't really have a lot to say this morning, more in the reflective tones today than anything.

Have a great day.