A few pics. First 3 are of my son getting some awards at the end of year JROTC awards ceremonies. Not the greatest pics, unfortunately, the entire center row of seats from front to back were reserved for the cadets. 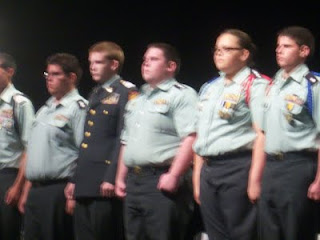 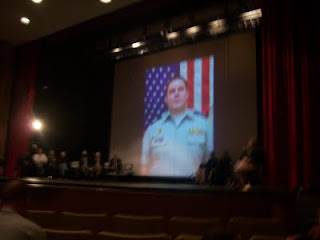 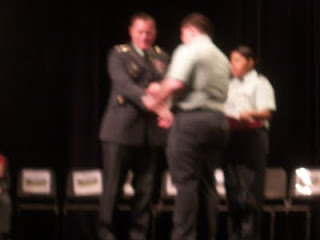 Pic below is of the silver van owned by the neighbors that like to call the police more than NFL fans call for pizza delivery. While they make up stories to try and get me into trouble, notice the van is parked the wrong direction. The police made the guy move it but didn't issue a ticket. 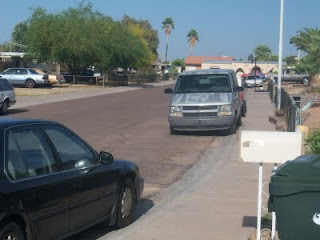 Some of the pics below are from my cell phone. You can tell because I had to first send the pics from my cellphone to my email, then "print screen" on the pic in email, then use paint processer to convert them into a Jpeg pic. The reason you can tell is because all of the tabs from the internet sites I was on are showing at the top of the pic. I haven't quite figured out how to crop pics yet without losing the entire pic.

So, pic below is also from the mine I was in on Monday. This mine was abandoned and not used for at least 2 decades. Many of the old structures are still up. This is one of them. I have no idea what it was used for. Interestingly, they have found the largest vein of copper in existence underneath this land, 7,000 feet down. 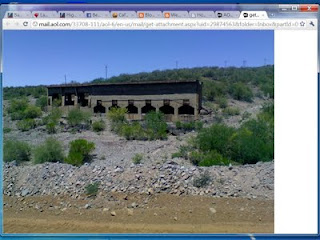 Pic below is of Fry's food store with camera phone. Poor pic, yes, but you can see the trash can is overflowing, there is trash on the sidewalk and there is trash in several carts. You can't see from this pic, but right next to the trash can on the other side are hundreds of cigarette butts lying on the ground. Just what you want to see when you enter a grocery store! 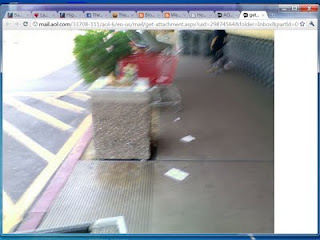 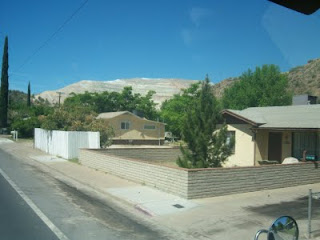 Pretty quaint old towns up in these mountains. Started decades ago, these towns popped up into existence solely because of the mining operations. 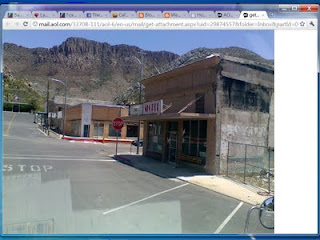 This is from the mine, also. It's a train sort of set up that goes into the mine. I have no idea whether this is a "current" set up or if this is also from the past. I took a pic of an old locomotive housed inside of a shed, too, but the pic is gone. I wish I had it, it's REALLY old and the tracks leading to the shed are long gone! 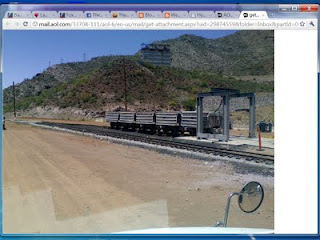 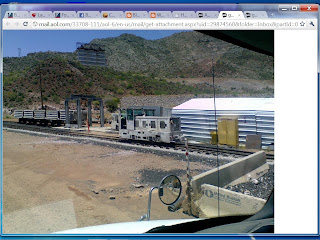 A maze of HDPE pipe in a different mine I was in a while back. We sell and deliver this pipe. It's thick, hard, plastic pipe. It can handle chemicals such as sulphuric acid being pumped through it, which is what mines use, apparently, to extract the copper element from the ore. 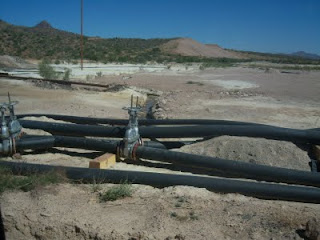 28 dead. That's the death toll in the latest shootout between drug cartels in Mexico, bodies found littered on the highway. The State Department issued advisories before Spring Break for college kids advising them to stay away from several, specific states in Mexico. You couldn't pay me enough money to go down there right now. I wouldn't even want to go into a border town, much less the interior of that nation. I'm wondering why the Mexican government cannot get this chaos under control. I have no idea what American authorities would do if such killings were happening here, but I doubt it would last as long as it has down there.

I don't necessarily believe the recounting of the story, either. Police arriving long after the showdown is done and over with. I have heard of and personally encountered enough corrupt Mexican police "officers" to know that there is at least the possibility that they intentionally do not get involved with any of this junk until it's done. You got money they definitely take bribes. You get pulled over for a traffic violation - whether real or usually imagined/made up - they will sit there and tell you how you are going to have to go to jail for 2 or 3 days unless you pay them upfront. They aren't giving that money to the local town government, rest assured. I have paid them off because the prospect of sitting in a small, town jail with a dirt floor and a pit in the middle as a toilet, spending that quality time in the presence of a bunch of other people with unknown intentions? Here's $20, have a nice day.

They always want more, but I never gave them that much. The last time I had to pay one of them off, I had just enough gas money to get back home on me plus a bit of eating money. The guy wanted $80. I said I couldn't afford it, I would run out of gas. $60. $50. $40. I then offered the $20 and he let me go. Yes, the $20 was eating money, I just didn't eat until I got home, which was half a day later. They used to stop me when I was doing missionary work down there and take whatever they wanted from the donations out of the back of the pickup I was driving. The best winter coats and blankets and whatever else appealed to them.

What were you going to say? You are in another man's land and they can basically do with you as they please. They can make up stories about what you have allegedly "done" if you resist them and then you are in a heap of trouble in a foreign land. It wasn't worth the risk, to me anyway, I just let them have what they wanted and moved on. You wanna spend even 10 minutes in a Mexican jail, be my guest. I had to go down there to a border town - Juarez - and practically beg a judge to let a co-missionary go. I have no idea if the judge was corrupt or not, I am not willing to go that far with it. He wanted a fine paid for the man's "infraction". I had like $10 on me, that was it. I pleaded with this guy for half an hour before he finally agreed to take my $10 and let the man go.

I've had the Federales threated to imprison me on countless occasions. I have had the Mexican army pointing their assault weapons at my head, also talking about incarceration. This while I was a MISSIONARY.

I have no intentions of going back down to Mexico ANYTIME soon. Maybe never again.

Anyway, spent a good deal of time with my dad yesterday. He seems to be doing well. Okay, well enough as one can expect for a man his age. He has arthritis in a bad way, I guess that's the biggest malady that hinders him. Today is Caleb's graduation. I have the day off work (I hope, anyway, unless I get a phone call), I am going to spend more time with my dad and then tonight is the festivities. I DO hope it doesn't last 3 hours as some are claiming it might. A good hour, hour and a half is enough for me.

After today? Well, my dad is going to be around most of the day Friday. He planned it so that he would be here a day early and of course leave the next day, but later, at 5:00 pm I think he said the bus leaves. He is not living in Tucson yet, they moved most of their stuff their but I guess they are still in Sierra Vista dealing with the house and trying to get it painted, cleaned up professionally and ready to sell.

Anyway, I don't know what I am going to actually do on Friday, but since my dad will be over here, a bit more conversation is in order. I may go out and get started on that horse trough and getting it ready to fill up with water. Otherwise, I will wait until Saturday.

It's going to start getting very warm here and I would like to get that project done and over with before June, when on the first day of June it's slated to be 103, the next day 107 and then after that 111 and 110. Yep, dive right into the thick of gross heat right at the beginning of the month when it always starts getting like that.

Well enough. I have some store visits to do and phone calls to make.

I have an absolutely horrible headache. But I'll get to that in  a moment. After discussing today with "people in the know", ...