.............sitting on a carpet on the concrete with my Catahoula.  I had forced her outside because yes, I have given her fully 5 enemas today and we aren't through yet.  We will get past this problem regardless of my distaste of having to sit on top of a dog to keep it from getting up and running off and more to the point: having to stick a syringe up a dog's @$$ full of fluid.  I have dumped mineral oil down her throat today a couple of times as well as a bit of Gatorade here and there.

I was petting her and she had her head on my lap, completely out of it.  I was looking up at the sky.  I had forgotten the numbers of contrails to be seen in these parts. 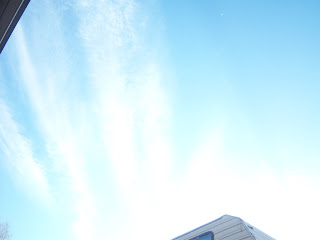 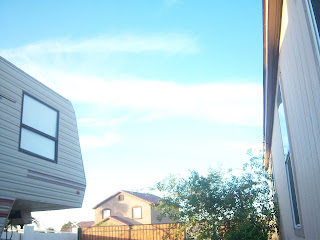 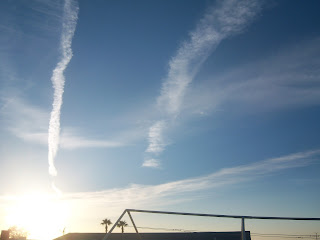 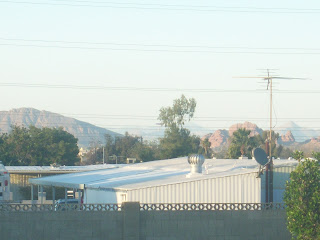 You aren't looking at clouds, you are looking at contrails, plus the rear end of Camelback mountain and not sure if the Southwest Airlines plane that is landing shows up. 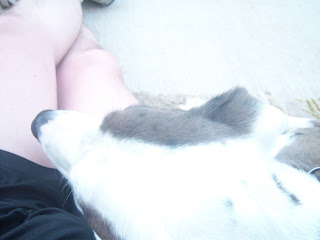 I guess I should stop going.  I go in there with terrible mind battles more often than not and today was no exception.
I don't blame this church I am going to, per-se, I probably really only have myself to blame but whatever.
There isn't much to say about it.  I lasted through 1 hour and 10 minutes of worship service, got up and left.
I promised myself that I would at least try the "small groups" and so, I at least try to keep promises to myself, so I will attempt to go on Tuesday evening and see what, if anything, happens.  The leader of the small group I signed up for actually came forward and introduced themselves.

Anyway. Coco - my Catahoula - not doing well at all.  I broke down.  I wasn't about to insert that enema syringe in there with all the fight she puts up, but enough is enough.  Took her outside, sat down on top of her and she had no choice.  She didn't like it - of course - but tough.  I did it again 40 minutes later and will be doing it again another 20 minutes from now and will continue with this until all that gunk comes out of there.  I have been dumping mineral oil down her throat.  She is gaunt looking, her flash wrapped over her ribs, she is obviously miserable and I can't just not doing something that will help her because she doesn't like it or - it grosses me out as well.  When we get past this, I am going to feed her food that will help fatten her back up again.  I set freshly cooked chicken out there for her a while ago and she wouldn't touch it.

Another 5 hours of enemas and I hope something happens.

Caleb still not feeling well at all.  I am feeding him and getting him fluids, the rest is up to resting and time.

I don't get the use of ATM's, really.  If it's your own bank's ATM and you aren't charged a fee, then no biggies. But paying $3 for YOUR money simply because it's coming out of some other bank's ATM machine is outrageous.  Rarely, do I use an ATM and now that QuikTrip has my bank's ATM's in every store, much more abundant locations all over the place, I need not use a fee'd ATM.  I have never liked the idea of paying money to get = your money.  I have done it- yes, but extremely infrequently.  A few times at some casinos, a few times on vacation, other than that, never locally.

Convenience costs money, in many cases and it's simply not worth it, much of the time, for me to throw money down the drain that could be going to something else.  What got me started on this? A story about ATM's with banks that are charging 3% per transaction, not $3.  Difference without a distinction if you're taking out $100, but anything over that?  $3 per 100 is basically what that means.

I'll go back to cash only living, having no bank and doing money orders before I am forcefully subjected to outrageous bank fees.  At the moment, I have free checking - that because I both have direct deposit and also use my debit card more than 8 times per month.  Either of them will get free checking at the bank I am currently using, though I am considering switching to a credit union.
at February 26, 2012 No comments:

I was quite humored when Kyle - a family friend I guess you would call him all of 18 years old - came over here yesterday declaring that he was selling tools for whatever customer and earning $1,500.00 per week.  Is it possible?  I suppose, but at the same time, he is going to a school of massage therapy to learn how to become a massage therapist which I doubt would earn him that much money.  Instead of questioning him on it, I simply told him that he is making more money than I am!  He used to hang out with Caleb over here but then got aligned with drug users including heroin addicts and he disappeared off the radar for quite a long time.

He also impregnated a girl and has a baby  now.  He is off the drugs - though he drinks regularly, still better than being on drugs - and apparently has had a fire lit under his fit to work, work, work and earn money to support the girl and the baby.

Well whatever.  Then he offers me a professional massage at the low rate of $1 per minute, lol.

Meanwhile, Caleb got the flu.  Probably, I am guessing, from college.  I dunno, but I want nothing to do with it.  I have been feeding him and giving him plenty of liquids but other than that?  Staying away from the boy.  He has been sleeping/resting/kicking back for a couple of days now.

Coco - the Catahoula mix - is still plugged up but finally some "stuff" is coming out.  Hopefully the mineral oil will work it's way through all of that and all of that will come out - preferably today and get it over with.

I continue to torment myself - well not that bad but you get the picture - with endless articles on the web about baby boomers not having anything or too little saved up for retirement.  I know, I have talked about this a lot on this blog, but it keeps it alive and in my face. You can look at 15 or 20 years and say that's a long time, I don't need to be so dramatic about it, but - that isn't that much time and it will be here faster than you know and then kablaam, whatever you have saved, that's it.  If you didn't save enough or even save anything, you are screwed.  Well I can tell you right now, if I had to retire today, I am screwed.

It takes money to make money - a very true statement mostly - and that is the plan here.  I am not going to get enough for retirement simply by means of what I am putting aside in the 401k or even in the bank savings account, it is going to have to be upped substantially.  I am changing my mind about that travel trailer that I wanted to trade for a pickup, better to sell it and save the money for that casita I am going to build.  I haven't firmly decided on that yet - I have 3 more payments and then I can make a decision.

Well I get a day off. Whether I go back out tomorrow remains to be seen. Right now? I/d be happy for a couple of days off, even if it means ...