Today, I decided that I was going to have to go down to the police station, get the police report and then go file a civil suit in the Justice court.
I was planning on doing that tomorrow after work providing I could get off work early enough and get down there in time to get all of that done, cause' honey, I want to do ALL of it and get it over with, not just get the police report and then have to go down there again to file the complaint.

They are 2 separate buildings a few streets apart, but it's the time factor in trying to do all of that that is the consideration here, not the distance from my work to get there or the distance those 2 buildings are apart (though helpful that they aren't too terribly far from each other so no long driving time).

Anyway, thinking about that today while attempting to navigate around Phoenix - this the second straight day of a serious semi accident on I-10 that shut down the freeway and caused traffic mayhem all over the place and subsequently, my having to take lessor known back roads/routes to try to get around all of it - I thought what a bummer.  Why do people have to be forced to make things right?  If my dogs mauled someone else's dog, I would have talked with the owner the same day and then had follow up communication about paying for the damages.  First off, it's the right thing to do. Second off, if you need a motivator, if the other party is forced to take you to court, you have potential lawyer fees; court costs and whatever else they can get you for on top of the vet bill.

Well, I get home today and talking with whoever here - no lack of people to talk with around my house at any given time - my phone rings.  It's the lady that owns the dogs!  A bit of an awkward start to the conversation, but I was glad she called and hopeful to get my money back out of all of this without having to go to court.  We start talking - I knew her name is Crystal cause of the police card I got from the cops that night - but that was all I knew.

She says: "I don't know if you remember me, but I'm Brent's mom".  Brent used to play video games with my son a long time ago.  It's been many years since I've seen him and his sister, they were taken away from Crystal due to circumstances not worth going into here.  OH.  Yes, I remember you!  We talked for quite a long time and not just about the dog issue - though I did make it clear that I wanted my money back and payments would be okay.  She went into her life and how she works at Denny's and how Denny's has, actually, cut hours back so that they aren't forced to pay for Obamacare health coverage.  If you work over X amount of hours (she told me but I don't remember, I'm sure I can look it up but I don't feel like it right now) then companies are forced to pay for health care coverage.  I had heard of some companies cutting back hours, I didn't know that it was widespread already.  Apparently as of January 1st.

Well anyway, I didn't expect to hear from her that her financial situation was too good in looking at the place she's living in, but who knows.  And it isn't.  Including an IRS garnishment.  Well, whatever.  I still expect her to pay me whatever she can come up with - even if it's $25 I would okay with as long as it keeps coming in until it's all paid up.

So that's that.  Uncle Bill writes emails to his brothers frequently.  I sometimes get them.  He has a terrible, painful, debilitating disease - I don't remember the name of it - and it is slowly consuming his life.  I wonder why people have to go through such terrible things at the end of life.  There is no answer to that question, but I do wonder why.

Tomorrow is Friday.  No great plans for the weekend.  I think this is the weekend Caleb wants to take the car up the hill to the Salvation Army camp on the Rim.  I would, otherwise, be thinking - at least seriously thinking - about going up to the trailer.  Weather is good so roads should be clear, I think I can trust him with the car.  He hasn't gotten into any accidents and besides that photo radar ticket in the mail that didn't go anywhere, he hasn't received any tickets either.  I still reel at the view of those photos that were taken of him that show him clearly entering an intersection after the light had turned red.  I see this stuff every single day on the roads and I also see the aftermath of a t-bone collision in some cases. I tried to get across the importance to him of NOT engaging in such activity in traffic - that it is not only dangerous but it could also get him and/or other people killed.  There was yet another horrific accident today involving a semi, no details I have found yet on what happened, but the driver of the truck was killed.  I hope instantly, because if not, that means that person burned up in the subsequent fire and other than a person being tortured to death, I can't think of much worse way to go than burning up in a fire.  Above pic is what was in the local online news of today's accident.  That mess over the concrete divider is what is left of a semi tractor.  The only good thing I can say about this accident it it's a damn good thing there is a rebar reinforced concrete divider there or a lot more people could have been killed in thinking about a semi going head on into oncoming traffic. 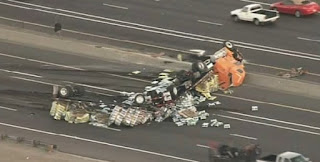 This is the crash I saw yesterday.  I was stuck in the "high speed" lane on the other side of the freeway. Too much traffic I just waited it out until it broke free right after the crash.  2 serious truck crashes in 2 consecutive days.  Crazy stuff.  I don't think the driver of that one died, though.

I haven't checked the hummingbird nest in a few days.  Just don't want to scare momma off, so just taking a peek here and there.  Maybe tomorrow or if not, then definitely this weekend I'll take another look and perhaps another short video if there is any significant change.  I know momma isn't scared off cause' that nest is about 15 feet from where I am sitting right now and I can hear her chirping frequently.  Hummingbirds have a distinctive sound they make.

And then there's Obama. Who was emphatically stating how police, fire and teachers would all be fired as of Friday if Republicans wouldn't (bow to the king) agree with him and do something about the sequester.  Now? He knows he isn't getting his way so he has completely changed his story.  The man is a bald-faced liar. Which isn't surprising, but it would be nice if all news media outlets - including all of the liberal leaning ones - would call him out on it.  But of course, they aren't.  The most liberal - MSNBC - doesn't even have it as a top headline anymore.  In fact, I had to scroll well down the page to find the story.  Of course they don't, they would have to potentially tell the truth in Obama's story changing crap!  LOL!!!