I have nothing going on over at my house that even comes close to the amount of stuff that goes on over at m'lady's house!

Today?  I get text from her: water heater is leaking, how do I drain it out?  Spigot on the bottom dear, hook up a hose and drain it out that way.  She and 16 year old - I think I'll just start listing his name since he's basically my stepson at this point, well not officially but since he's my responsibility - his name is Josiah - He has a Facebook page if you know m'lady's last name which at least some readers do you can simply type in Josiah and his last name and it will come up - are trying to get the thing to drain out.  Easier for me to deal with if I'm there, but basically the valve wouldn't open to drain it.

Yes well that's what happens when you don't open it up at least once a year and drain as much of the sediment out of there as possible so that it doesn't rust out the tank and also cost less to heat - so I made numerous suggestions and the finally got the thing to drain.

But while that was happening, her 8 year old daughter was in the kitchen, cooking eggs and set off the smoke detector, which alerted the monitoring company who tried to call her - with no answer because she was stressing over the water leaking out of the heater.  So guess what happened next? Yup, 2 fire trucks showed up.

Now she also wants to find out what is leaking through the upstairs floor and into the celing below.  Old house, pretty much it needs new plumbing I am guessing.  Stuff I could do but to get at it would mean tearing up walls and ceiling and all kinds of stuff - big project.  But if it needs to be done, it will get on the list.

Meanwhile, dealing with Josiah this morning.  No real issues, just that he is going over to girlfriend's house today and he has to text me when he leaves, when he stops at store, when he leaves from the store, when he arrives at the house and then every 2 hours while there and also if he leaves to go somewhere text when leaving, etc, so forth, ad-nauseum.  I am getting him trained.  Mom wanted all this texting before but he would "forget" with her and start trouble.  Yeah, that isn't going to work with me.  He is with her parents pretty much the whole so that's why he was fussing.  Well, son, because you are going to have a driver's license very soon and you need to get used to the idea that you are going to have to report to me - and frequently.

"Well are you EVER going to trust me?!!"  This is not about trust (well okay, so it is but I have to answer the question differently so he gets a different picture in his mind), this is about accountability and the fact that we all get tempted to do things we shouldn't and so, call it your Mentor looking over your shoulder just helping you stay on the straight and narrow.  Mom would give him a completely different answer that just doesn't work in the mind of a teenager wanting his freedom. He'll get his  freedom, with strings, lots of them, attached at first.  As he shows himself faithful and he earns my trust, then yes, some of the strings will be detached, but not all of them, not until he's 18 anyway.  After that, he is responsible for his own actions and that's that.  Whether he liked that reply from me or not, I don't know or care, he accepted it and that's all I wanted or needed.

So that's that - for now.  He's 15 minutes late on a text but since he texted me an hour ago about a change of location, I will give that one a pass but if he doesn't text my in the next 45 minutes, he's going to receive a text that says "strike one".  Lol.

And Josiah is the boy that I am going to sit next to and we are going to sing to our girls sitting in front of us together.  It was my idea but he's the kind of kid that is all over that kind of thing, he plays guitar and loves to sing.  The catch for me was I have to learn country songs of his choosing to do it.  So I've got 2 of them down - and I do mean down now after much trying.  "Hard To Love" and "It Goes Like This". The second song tripped me up for days, especially certain parts but I finally got it memorized and can sing it good.  Country music is WAY different than the music I like and grew up with, hard to get it in my mind.  The third song which I just started listening to last night is called Rewind by Rascal Flatts and  I dunno if I will be able to get it memorized before next Saturday, though I should if I spend enough time with it.  I think we are going to sing at the bonfire Saturday night!  I will definitely get a video of that bonfire, their pile of stuff is HUGE!! 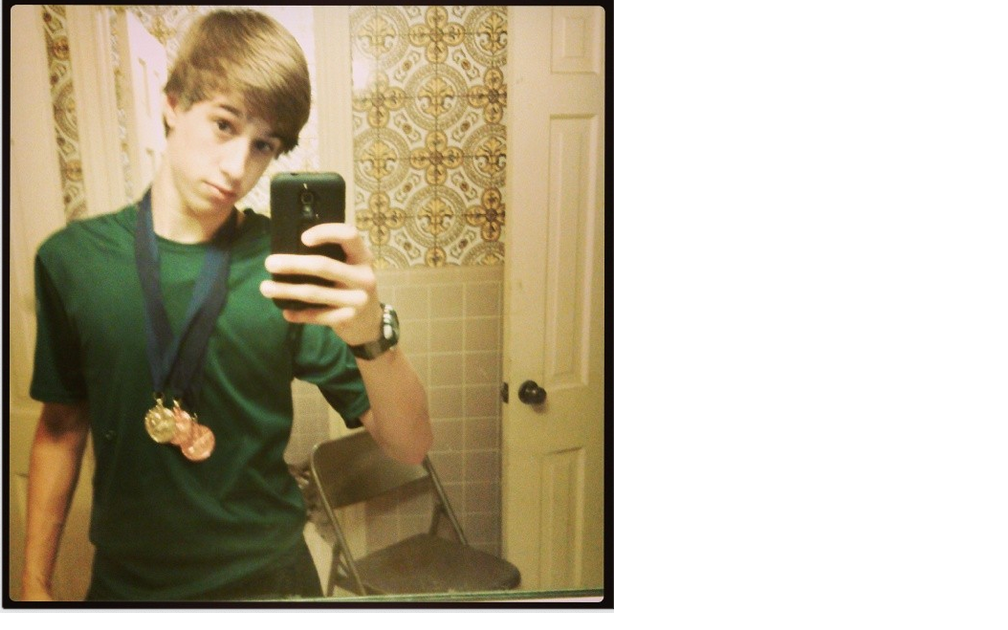 That's Josiah and those are 3 medals he won in track last night, one of them a gold in the 400meter run.  And he just texted me a few minutes ago while I was trying to figure out how to save an Instagram pic, which it won't let you do so, fortunately for me, I learned how to use the print screen and use paint program a long time ago!

Enough about that.  I have spent a good deal of time in that closet this morning, but I HAD to get out of there. I can only deal with that stuff for so long before I have to go do something else.  Going back to it in a few as I have taken and hour off from it.  Have frozen ribs I bought at last sale thawing, hopefully I can start cooking them in an hour or 2 and have them done no later than 5.  I just still cannot believe how much useless paper I have saved up in there. But I am finding a lot of gems as well, especially pics from the past of family.  And more money, lol, all of which I am using on the next trip.  Oh and some cool wall pics, I'll be taking them to Texas with me.

And that is the next headache once I finally figure out when I am moving there, which is still up in the air at this point.  HOW am I going to move my stuff there? I have not found a single option yet that is even remotely in what I would consider to be "affordable".  Even renting a U-Haul truck, the smallest one they have is ridiculous.  If only I owned a pickup truck! I could just haul my stuff out there on a trailer.  I have no clue yet.  I may end up installing a hitch on my car and buying a $200 Harbor Freight utility trailer, about $400 for all of that, which is at least a $500 savings over ANYTHING else I have found so far.  It's at least viable solution since I am not taking a house full of furniture with me. But I have 3 dogs to haul as well! Gag! That's going to be one LONG trip is all I can say.  And with those dogs, I won't be able to stay at any motels, they might let me have one dog in a room but not 3 and definitely not 2 of them that are that large!

Yeah, moving is going to be a huge pain in the ass.  I guess I am going to have to resolve in my mind to basically drive straight there with food stops and dog relief stops on the way and then just sleep a day when I get there.  I haven't done that kind of driving in a long, long time, but I used to do it regularly.  Don't much care for it but I think I can do it with a few nap stops here and there. Dogs will just have to suffer.  My record is driving out almost 1,000 miles without stopping once.

Well, in my mind, whatever I have to go through to get out there is going to be totally worth it.  I might complain and whine a bit on the way, but I will stop once I'm there!

Back to the grind.

After 25-1/2 hours, they finally came out to get me to bring the trailer into their facility, drop it at the rack and come back out to wait ...