I am overwhelmed with grief for a man I only knew through reading his internet postings.  He was one of my uncles.  I only encountered him a few times and that was before I was 10 years old.  I read his Facebook postings - he kept a blog-like posting of things that were happening to him as the disease advanced.  https://www.facebook.com/bill.barkley.98

His beloved doggy died suddenly on him last month, he had posted and pics of him with the dog. Dogs bring out things in us human folks.  That is a fact.  You see the pic and you might understand what I am saying. 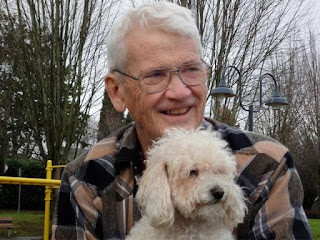 That's uncle Bill.  The thing that gets me about this photo?  This looks exactly like my dad, of whom I haven't spoken with in over a year and I have absolutely NO idea how he is doing. I finally got their phone number and have been calling and calling and calling, with no answer.  Ugh. I want to see my dad. I don't have good feelings about his situation.

Uncle Bill posted that picture last month. When I read what happened with the doggy dying, the thought came to my mind: he won't be with us next month. I have been hearing futuristic events about my and other people's lives since I was a teenager.  I distinctly remember this: He's going to die next month - it was pictured in my mind in huge words like you would see on a billboard. How do you tell people that stuff? You just don't. Why do these things even come to me? Well, this one about someone's death isn't a daily occurrence.

I want to take a pause in life and say, okay, I need to deal with this and move on.  And if it were immediate family, I would.  I've been having a bad feeling about my dad for a few months now.  But nothing like the words flowing through my head about my uncle.

I have to get away from here.  I need the solitude that the excursions to the mountains used to give me. There are no mountains around here.

For all the things that happened today, I just can't anymore with this.

Email ThisBlogThis!Share to TwitterShare to FacebookShare to Pinterest
I posted somewhat about this before the divorce.
This dude calling Valerie on a daily basis - while we were still married.
Well, I find out today, she's married to him.

You didn't read that wrong.  She has already remarried and to this dude she was allegedly only "talking to" on the phone.  I asked her at the time: have you been having sex with him?   The fact that she could remarry what amounts to a total stranger in such a short time. Conversely, the fact that she was basically dating this dude before we got divorced. It will be a good thing that I don't ever happen upon them together in public somewhere.  For if that happens, there will be a confrontation.  I didn't say violence, don't read what I didn't say, but there will be a verbal confrontation and it won't be pleasant.

Not seeking any of this out, I just don't ever want to see them together, for in my world, that is an extremely bad, evil and deceitful thing to do.  I don't wonder if I couldn't get a lawyer to sue on this.  I consider this marital unfaithfulness and I have a solid case for damages.  She is rich now, she apparently got a retirement lump sum and she  has sold her house and already moved to the new property.  I helped her sell that house.  I spent my own money on paint and materials to make that place look as presentable as possible without spending a fortune on it.

Whatever.  I may dwell on this to some extent in the next coming days. Natural human response, wouldn't you say?

I got my 8 hours in today, left at 3pm, drove to - what I couldn't find the address. It was leading me to the police department but this is a private company.  Well I tried a different map and it had the same ending.  So, I went into police headquarters and lo and behold, there was a sign in the lobby with the name of the company on it and a lady sitting on a couch - no-one else there - asking me if I was there for fingerprinting.  Yup, I am.  I'm early too. No matter, she replied, other clients aren't here.  It took about 15 minutes to complete.  Thumbs.  Fingers.  Each finger including a side print.  They got me in their system, but then again, they've had me in their system since I was 13 years old.

Now it's a waiting game up to 3 months to actually get the license.  Not a big hurry. I don't have a handgun that will work for concealed carry and I don't want to open- carry.  I was given several names of guns for consideration by the officer that conducted the course, I will look into it once I get the license.